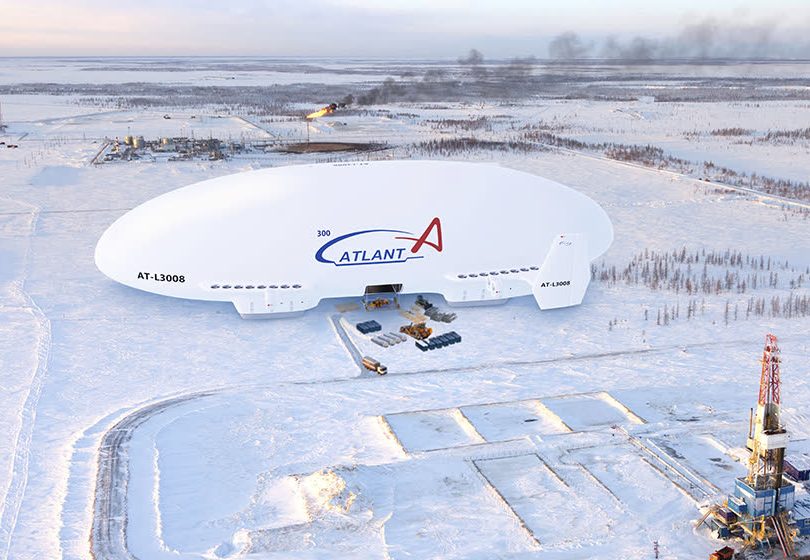 Here is the English translation to the article:

ATLANT 300 will be able to carry up to 160 tones for 2,000 KM. UN World Food Programme (WFP) and a wind turbines manufacturer had already confirmed interest in using of tenth of these devices.
“The company also develops airships for tourism”.

Atlas company from Rosh Ha’Ayin is looking for investors for the development of unmanned, hybrid airship project, which will be able to transfer overweight cargoes to long distances. The company is planning to develop three models that will be different in sizes and cargo capacity. The biggest model, ATLANT 300, would be huge: 200 meters long, 100 meters wide, and 50 meters high. It will be able to carry 165 tones of cargo to 2,000 KM at a speed of 120 KM/h at all weather conditions, including harsh ones.

The other two models are ATLANT 30 and ATLANT 100, they are smaller in their dimensions and can carry 18 tons and 60 tones accordingly, at the same speed and to the same distance. The company had already signed LOI with UN World Food Programme (WFP) on development of airship, which will be used for food supplying to remote destinations all over the world. Another LOI has been signed with a big turbines’ manufacturer, that intended to use airships for trafficking turbine blades. According to Atlas’s estimation, if this development program will come true, only those two customers will use 20 airships from the ATLANT family.

Alternative to cargo airplanes and tracks

Yaron Bul, one of the owners and the man in charge of the business development in Atlas, explained in a conversation with TechTime that the airships developed by Atlas has many advantages with comparison to cargo airplanes and land transportation by tracks. “Those devices are designed to operate in the most difficult weather conditions. The body is rigid. The airship is a good alternative to land transportation by tracks, which can be very dangerous at wintertime in countries like Russia or Canada”.

Atlas’s cargo airships can take off vertically (VTOL), just like a helicopter or drone, without any necessity of ground facilities or landing pad. That way it is possible to carry cargo from starting point straight to the destination, without intermediate stops. The enormous size of the ship allows it to move large cargo, such as wind turbines, as one peace. And since they are using hybrid engine, the carbon emission caused by airships is significantly less than that of an airplanes, “Our airships will offer much chipper prices for ton per Kilometer with comparison to many other means of transportation.”

Atlas was established in 2016 by Gennadiy Verba, Russian Business Entrepreneur and Engineer with Jewish roots, who divides his time between Israel and Russia. Verba has been designing and producing airships and aerostats for over 30 years. At the end of 1980’s he took part in the establishment and management of Worldwide Aeros company in Ukraine and later in California, which produces airships for military and commercial market, and still exists nowadays.

In the end of 1990’s, he had established in Russia company named RosAeroSystems, and today’s Atlas is based on his technologies and intellectual property. Nowadays, the design and the production of airships is mainly located in Rosh Ha’Ayin.

As a matter of fact, Atlas has 3 lines of products. Besides the family of cargo airships, the company also develops and produces surveillance aerostats for security and communication purposes and designs airships for tourism and entertainment. There are 6 models, that will carry 8 to 24 passengers and crew members. The airship will float in the air at a height of a few hundred meters at a speed of 110 KM/h which will provide the passengers with a bird eye view flight experience. “Since we are talking about electric propulsion and because the engines are separated from the gondola, the flight is incredibly quiet, unlike helicopter ride. This is truly extraordinary experience.” The company is negotiating with a few parties in Israel and abroad regarding tourist airship design, and even holds talks with companies from the Emirates.

Airships were ones of the first aircrafts ever built. The earliest prototypes were developed in the middle of 19th century. The airships golden age was at the beginning of the 20th century when they were used in military and travel purposes. But the fast development of airplanes forced the airships out of the market almost completely. Today they draw attention due to the demand for cleaner and chipper ways of aerial transportation. Research Institutes are estimating the airship market will grow to a few hundred million dollars in the next coming years.